Born in March 1989, the artist collective “Ateliers d’Artistes de Belleville” (meaning Artists Studios of Belleville) was founded when many visual artists came together and decided to carve a spot for themselves in the urban landscape, all the while helping maintain their creative huts alive. This is our story… 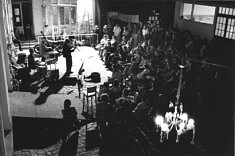 BELLEVILLE, THE HOMELAND FOR ARTISTS

During the late 1970s, Belleville is a Parisian working-class district with contrasting sceneries, ranging from old, half demolished buildings and vacant lots, to several urban renovation plans: a spectacle revealed in photos by François-Xavier Bouchart or Henri Guérard for exemple.
A first wave of artists, mainly Parisians, to reach shore in Belleville during those years follows to set up camp in the district. They occupy old artisanal and industrial buildings and begin to transform them into their own creative huts, ateliers, allowing them to further invest themselves in the life of vicinage, and later regroup to form various collectives. 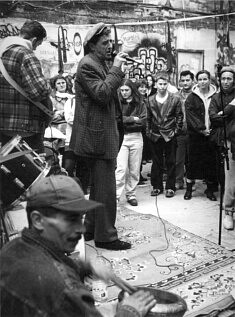 In January 1990, three sculptors, Miki Tica, Christian Guillemin and Éric Théret, gather in the laters atelier, residing on Rue Ramponeau (20e), n°48, and contemplate on creating a collective of artists and envision the opening of their ateliers to the public.

In his words: “Me and Christian had come to the same conclusion: many ateliers had been in danger of disappearing, and us, young artists aged 31 years, had shown just very little of our work despite wanting to see the publics reaction to it.” – Éric Théret (first secretary of the collective)

In May 1990, the first edition of the “Belleville Artists’ Open Studios” is held. The goal behind the event is to defend such spaces from eviction, open them up to the public, and create bridges between the variety of cultural expressions. It holds an immediate success: the publics support is fervent and the media coverage extensive. The “Open-Doors” live on to become an annual gathering in Belleville, as well as a model event that will further be exported into France and the rest of the world. They are the surface image of a raising network of artists all coming together.

PRESERVING OF THE CREATIVE SPOTS, OF A PATRIMONY

From 1989, the municipal undertakes an urbanising motion that was to demolish almost the entirety of the îlot Ramponeau-Belleville building in order to conduct further renovations. In response, both locals and artists mobilise themselves in protest: a stand against the motion is organised, brought forward by the collective “La Bellevilleuse”. At its side, the AAB operate for the preserving of the creative locals. This first movement leads them to victory in 1998, as 80% of the buildings are rescued from demolition and the integrity of the residents relocated in their homes.

The following years, other quarrels against the destruction of similar buildings will allow the preservation of such sites that had become emblematic to the district, such as “La Forge”, old factory turned atelier (nowadays known as “Villa Belleville”), or “La Maison de Casque d’Or” (in which the real Casque d’Or found refuge, and further serves as the decor for Jacques Beckers movie) whom shall be open to public, including it’s garden, every year during the AABs Open-Doors.
AABs engagement in the defending of patrimony and the creation of ateliers is still of great relevance: the recent movements around the Ramponeau 48 and against the privatisation of the “Maison de l’Air” make proof of such.

Following the success of the AABs Open-Doors, a second wave of artists begun to seek shelter in Belleville during the 90s: the plasticiens join the landscape after it had become advertised as the land of creators, and find a slot in an ecosystem that accommodates them. The number of artists adhering to the AAB collective grows, in parallel to the number of artist squats that emerge in the quarter.
Over the years, the district of Belleville is transformed as it continues to attract artists, actors from the cultural sector, as well as investors and real estate projects. Nowadays, the local artists are afflicted with an economical eviction, brought by a perverted effect of their past actions. Nevertheless, they vindicate for their spot in the district, and question the role they shall carry in it.

“The AAB, in June 2004, invite collectives of artists from the capital to come reflect on their role, via the Open Studios, in the districts, in the city, and the urban politics” – Sophie Gravereau

THE ARTISTS IN THE CITY

Arriving in a district rich in history from a multicultural, dissenting working-class, in which they seem to have found themselves, the artists have adopted Belleville, as much as it has adopted them…

In engaging themselves for the preservation and valorisation of their district, in opening their doors to everybody, they compelled into creating dynamic cultural practices in a peculiar landscape that continues to create and sustain Bellevilles reputation.
Nowadays, the association gathers over 250 artists and smaller collectives in all the visual art fields, of all generations, and of distinct sensibilities, but who work together in order to carve themselves in such landscape: they aren’t necessarily based in Belleville, but they cherish a residents relationship to the quarter, and help shelter the role of the artists in the later.
Over the years, they offer expositions, living models ateliers, artistic events and projects, encounters, and every year during the Spring season they organise the Belleville Artists’ Open Studios… 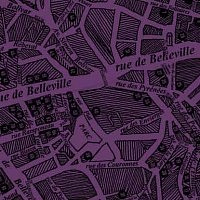